The chapel of Sts. Peter and Paul had its beginning in 1976 with a group of Catholics who were dissatisfied with the revolutionary changes they saw happening in their local churches in Albuquerque.  Until 1979, the group attended Mass said by a number of traveling traditional priests at the University of New Mexico campus chapel.  In September of that year, the group incorporated itself as Queen of the Rosary Catholic Mission, Inc. (OLRCM) and subsequently in October, purchased a small building to function as its chapel at 333 58th Street NW.

Though this chapel could seat 100 persons, had accommodations for a priest, as well as rooms for holding classes and social functions, it became clear rather soon that something larger would be needed to fulfill the needs of the steady growth of the parish, and so once the mortgage had been paid off in December 1987, a building fund was established. 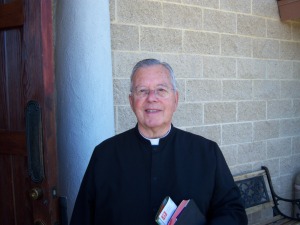 Meanwhile, on July 5, 1981 the OLRCM board of directors voted to transfer ownership of the chapel to the SSPX, and in 1992, Fr. Ronald Bibeau, a long-time friend of the SSPX began to say Mass at the chapel continuing to the present.

In 1999, an elderly couple generously provided the funds needed to acquire a 5 acre city lot not far from the former Queen of the Rosary Mission, as well as down payment towards the church’s construction.  In gratitude to the benefactors, the pastor, Fr. Bibeau, decided to rename the new church after the husband’s baptismal church, Sts. Peter and Paul.  The new Romanesque-style church was begun in late 2004 and completed in May 2006.  However, due to difficulties with city ordinances, Mass was not said in the new church until the Feast of the Immaculate Conception, December 8, 2006.  Since then, the parish has moved to its new location.